We have helped clients put the nightmare of a crisis behind them and begin anew. We have done this by executing a strategy that combines: (1) skillful crisis communications, (2) total commitment to ethical behavior, and (3) organizing an effective crisis management team.

In a crisis we focus on communicating quickly, sending your message through the media, both traditional and social media, to reach a wide spectrum of stakeholders, many of whom are now located around the world. The messaging will communicate your ethical commitment to resolving the crisis in order to do what is “right” and “good” for your stakeholders. Employees are a critical stakeholder group that can be overlooked in a crisis, and we can help improve communications and relationships with employees and thereby avoid the situation where the outside media is their main source of information on the crisis. We monitor the media reporting on the crisis, and take actions to correct misunderstandings. For the organization’s key spokespersons, we provide media training. In this way, we help you retain the goodwill and support of stakeholders when it is most needed.

The composition of your crisis management team is critical, and we can help strengthen it by finding outside professionals and experts as well as suggesting the addition of internal members from relevant departments within the company. When the crisis ends, we help the team focus on rebuilding to ensure that root causes are addressed.

Some examples of work done for other clients include:

Employees of a major national restaurant chain, mainly students and part-time workers, were made to work excessively long hours on a regular basis, until finally it was reported by the media and became a major scandal. The crisis resulted in outlets being temporarily closed, and the company’s reputation being described in negative terms as a “black-enterprise.” Inoue PR provided crisis management, crisis communications and spokesperson media training which included simulated interviews by an ex-journalist from a major influential nationwide newspaper. Post-crisis, we organized and managed a team of internal executives and external experts to create lasting reform throughout the company.

A Swiss-based global pharmaceutical company operating in Japan was at the center of a scandal over its product testing with university hospitals, medical societies and research institutions. We provided spokesperson media training, and organized the crisis management team, which included outside experts.

The subject of Risk Management is complex and involves many different risk areas as can be seen from the below diagram. With all the risks facing an organization, it is wise to develop the capability to deal with the possibility of a risk turning into an actual crisis. We help customers develop a reserve of what we call “image stock,” which is the building of goodwill among stakeholders that will give them reasons to support you during a crisis. We also offer clients a wide range of Issue Management services based on years of experience assisting companies proactively address the particular issues and concerns that can arise in the Japanese market. 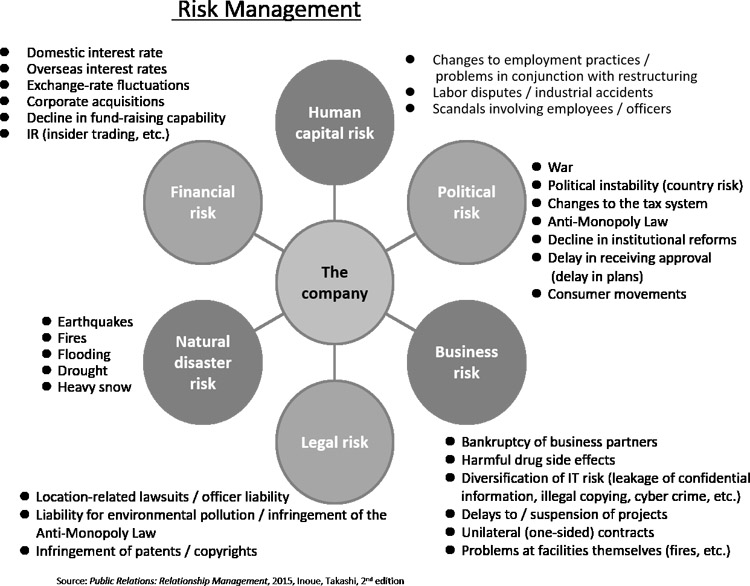